In total the UK spends over £419 million on Halloween products and other confectionery goods each year.

Mintel a global market researcher, has reported that Halloween has exploded in recent years, with overall consumer spending on the holiday continually rising since 2009 – up an enormous 263% between 2013 and 2016 alone, and shows no sign of slowing down.

Halloween is now the third largest seasonal occasion in the retail calendar and is worth a monster £39.6m amongst convenience stores alone, growing at 8.7% year-on-year.

This holiday is now a capital for sweet manufacturers across the globe and with new trends developing amongst adults, manufacturers now have more of a diverse market range to increase their overall sales. Tangerine Confectionery have already jumped onto one of these trends by capitalising on adults buying retro sweets that takes them back to their childhoods, they have released a new Halloween themed treat under their Barratt Brand just at the peak of Halloween sales. After the relaunch of the product (Tricks Mix - a retro styled mixture of sugary goodness and old style design) saw an 8.7% increase in sales. 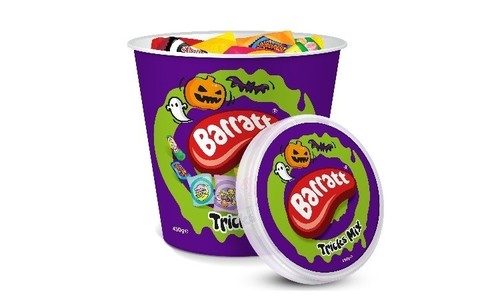 The 450g bucket contains a mixture of old school favourites, including Dib Dabs, Fresher Rolls, Foam Shrimps and an all-time classic of Cola Bottles and Fruit Salads. After the revamped launch Tangerine Confectionery positioned the sweets as their best seller in October 2017.

“The Halloween confectionary market has grown by 34% over the last two years and we don’t expect this growth to slow down.” – Russel Tanner, Marketing & Category Director at Tangerine Confectionery.

According to Euromonitor International, the Global Confectionery market’s retail sales are to rise by 2.7% this year to reach over £145.39bn. In early July sweet/confectionary goods manufactures started to promote their products online, with ‘Buy Online’ now being a main area for e-commerce sales, confectionery companies are using platforms such as Amazon, EBay and Etsy to promote their seasonal products.

Amazon is the fastest growing influence for the candy industry and will ultimately be the biggest sales drive for confectionery manufacturers over the years. Amazon's total candy sales between September and October last year grew by 38% compared to 2016, with most of the growth being in October just before the Halloween period.

The Attack of the Sugar Tax…

Even after the sugar tax levy being introduced in early April 2018, manufactures haven’t really seen a dent in their quarterly sales or profits, with most of them having reduced the amount of sugar in their products prior to the tax even being actioned – predominantly the tax was introduced to tackle the amount of sugar in fizzy-drinks. However, the treasury have predicted the tax will increase to £240m within the fizzy drink industry alone.

How could the sugar tax effect the candy industry in the future?